Gunther was spewing!!! We received a three minute penalty for being late at a time check (Navigators mistake). The argument continued long after the time check, as I tried to blame him instead, but he was convinced that it was my fault and nothing would change his mind, not even ten minutes of sulky silence. I told him not to be so bloody stupid, it’s only three minutes, but you would think it was a catastrophe. Mind you he had just driven a good circuit and he had looked at the track on the web the day before, practiced it in his head all night and been chuffed about his time.

Oh dear. For those of you who don’t know the rules, three minutes is a long time to make up. We slipped down from 4th place to 6th place. I’m a big picture person though and I told him to calm down. It didn’t help.

Today we had a medal section on Swaersboek Pass in a beautiful valley that wound in the semi desert out of Craddock. We didn’t make up three minutes and perhaps not even 6 seconds but I think Gunther had fun.

He finally turned off the heater that had been pumping the whole time. So add 42 degree heat, a V8 ford engine, the power surges and the heater going and you will get a picture of why it has been so hot. No wonder we missed the passage control!!!!

We drove over the Prince Albert Pass which was stoney and spectacular. The shokkies are still holding up thank heavens after being welded like a panzer.

Today we stopped in Oudtshoorn in the little Karoo desert,  a place that is famous for ostriches. The male ostrich can grow up to 2.5 metres tall and weigh 135 kilos. Here you can have an ostrich ride or watch the ostrich derby. In 1890 to 1910 the jewish traders from Eastern Europe made a fortune sending ostrich feathers to fashion conscious Europe and you can now buy a mean feather duster!! I find it so inspiring  how people create something from such an arid environment.

Africa is a fascinating country with many contrasts and contradictions. We are travelling close to the garden route and one sees many more white South Africans and I feel like I’m driving down the south coast of NSW, until a baboon crosses the road or we pass a shanty town and we have a glimpse of a different Africa. Over half of South Africa lives under the poverty line. It has a hard past and a challenging present. It is a tough nation of people. 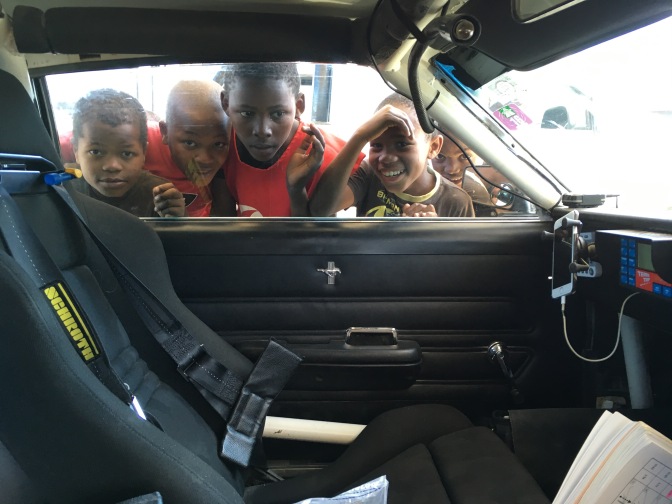 2 thoughts on “THE GARDEN ROUTE”