All about!! Brekky early down in the dining room of the swank hotel One and One. Every type of breakfast you could imagine from oysters and champagne, sushi, quinoa meusli with smarties to eggs Benedict.

On this particular morning however, I could only manage a meager bowl of meuslie and fruit, without even one of those french pastries because I was slightly nervous about starting the rally and having to meet all those new people being the only Aussie!! This rally obviously isn’t tough enough for all those alpha Aussie males. They’d have to bring the wife 🙁🙁

Finally strapped in and packed down, we left the underground car park to Fred Callager the organizer, waving a sad little flag and our trip meter not even on (my job). Where were the Chinese performers and drums of the Great Wall in China????

After a quick argument, trip meter adjustment and 10 cars already passing us we got under way through a very manageable Cape Town rush hour and Gunther getting used to Tilly’s 48 year old quirks.

There are 38 other cars on the rally, 90 people all together. Another array of beautiful cars, from E Type Jags at least 4 old Porsche’s, 3 Bentleys,  an Alpha Romeo AR51,  a Morgen,  a Ferrari GT 8 1974 (which has since dropped out due to air filter problems and no gears), the usual Mercedes, Volvo’s and a Datsun, 2  Triumphs and an Escort. There is also one other 1966 Mustang.

Far more interesting is the Englishman who has a company who strapped a famous singer to a plane wing (standing up) and flew over the Sydney Opera  House. Apparently he has 35 people a week in England who want to do it, so feel free……I’m sure the singer did!!

On the first day we actually stopped for lunch, which we aren’t used to at all. A beautiful windswept beach at the bottom of the world where the water is 14 deg in summer. Toasty warm for a dip and it also looked treacherous. A wild place where we were served BBQ’d fish over a coal fire and ate at wooden benches. The owner had crayfish out the back in a big tub, but apparently, he told me, we only wanted a light lunch.

After a day on the tarmac we arrived in Clanwilliam almost refreshed, to be given great entertainment from some young people and a dinner under the stars. ​

Oh What a Familiar Feeling

A big day, with our first trial where much to Gunthers chargin we got stuck behind a Triumph and lost time. We had the beginning of the dirt roads and we crossed the border into Namibia.
We were having a dream run. Ahead in the three hour queue to cross the border, and seeing the amazing contrast of  green grapes, fed by the impressive Orange River against a backdrop of stark mountains and the beginning of a very dry and desert like landscape. Well worth the watering for the beautiful South African wines.

We headed into the Richtersveld National Park, past Wuppertal and many other Dutch and German sounding names. The early influence of both these countries very prominent in the names and early architecture.

We drove on smooth gravel roads for the first couple of hundred kms and not so smooth dirt roads for the last 100 Kms. In fact teeth rattling dirt roads. Rounding a corner we saw one of our fellow rally teams in a MK 1 Jag (Albrecht, who won the Carerrera Pan Americana in Mexico). As we slowed down to check that he was okay, a loud bang came from the back of the car. We looked at each other (as we have done in the past) did a quick check of the tyres, found nothing and in our wildest nightmares didn’t really believe that we would indeed find anything on the first real day of the rally, and drove on, skating over the top of the ruts with our heads in the desert sand.
Fish canyon is supposed to be a spectacular sight. We had the option of visiting it at the end of the day so instead of going to our lodge, we drove on to the entrance of the park where I went inside while Gunther had a stroll around the car.

“Jill, don’t buy the tickets”  Gunther yelled  as I bought the tickets.

“Shit” I thought as I walked outside to see Gunther striding around the car tearing his hair out.

“I can’t believe it, that f……king idiot. This is unbelievable”

I peered into the back of the car to where he was pointing to see the shock absorber ripped  through the turret and the vinyl of the roof ripped to shreds where the shock absorber had constantly bashed against it with the rough roads. By this time the locals were looking at us as if our bolts had come loose.

I had to get our money back and we drove back the way we had come with Gunther beside himself with fury. We bumped into Canyon Lodge where we were staying which would normally have been a beautiful spot in the middle of the desert, surrounded by huge boulders and oryx grazing in the gardens. It wasn’t as peaceful on the inside of Tilly as it was on the outside.

Straight to the maintenance shed and Gunther had the local men working on welding new covers for the turrets. The mechanics from our trip were out on the road till 10pm helping a Porsche and a Bentley, both of which had big troubles. The Porsche has since left the rally and Andy, one of our magician mechanics managed to mend the Bentley with an external fuel line (all very legal I’m sure).

To cut a long story short, we were up till 12am fixing the car, only to have it breakthrough the turret again within 5kms of the lodge on our way out. The poor guy welding the steel only had sunnies as eye protection and his eyes the next morning were very sore. I felt bad about that and wasn’t sure about what to do. 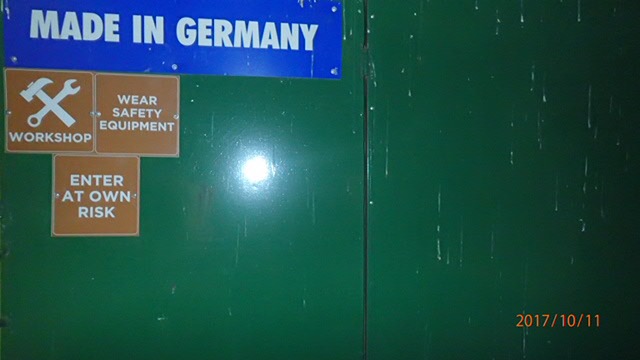 After all that, at the main time check down the road, our mechanic magicians finished off the job properly and after a couple of hours we were on our way again and are hoping that the other side doesn’t misbehave.

We never did get to see Fish Canyon, but who needs to see a Canyon when one can see the inside of a maintenance shed. And it was actually interesting the next morning to see how the lodge grew their own produce, from vegetables to pork, right next to the maintenance shed. 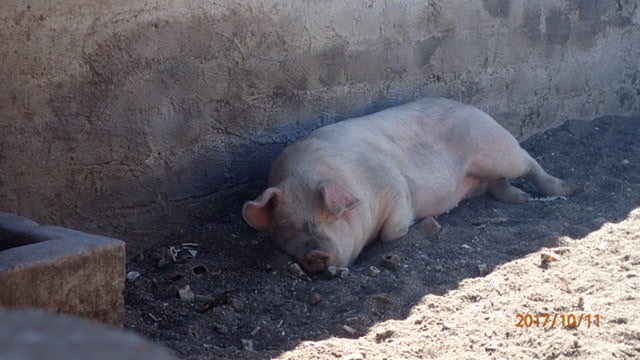 5 thoughts on “IN THE BEGINNING﻿”