We were tearing through Belarus. After leaving at 7 on Tuesday morning to get through the Russian/Belarus border with no drama, doing 5 dirt road tests (on our Tarmac tyres) we arrived in the hotel at around 8.30 pm feeling tired and hungry. A lot of people were a little grumpy.


The tests had gone okay. We hadn’t broken any records but Gunther drove well and all the rally nuts thought it was a great day. They love sliding around in the dirt. There is a lot of tetesterone pumping around those tracks and there aren’t many of the participants wearing bras.
This morning was going to be an easy day. Only 500 something kilometers and 4 trials. Supposedly getting in at around 5.30. As we drove up to the first trial and were waiting in line to start, we heard that a Peugeot had gone off the road into a ditch. This left more time for Gunther to worry about a funny noise coming from the what we thought could have been the gear box. One of the mechanics who is very funny,  sat next to me and put a sympathetic ear towards Tilly’s gear box and told us it was nothing. Just a vibration, he knows what nellies we are!

Off we started and raced around the track, at the end of which the sound was a little louder. Gunther was concerned and we drove to the first time check carefully where Gunther lifted the bonnet and several doctors stood around Tilly, examining her engine. Stethoscopes, catheters and scans were used.
The diagnosis was that a bearing had gone in the water pump. Something that shouldn’t have happened in a new pump. We were not pumped. In fact we were very deflated as we drive at 80 kms down the highway. Being optimistic!and hoping the pump would hold up we decided to try and make it to Brest 200 kms down the track. Of course  we would still do the passage checks and time checks so that we wouldn’t lose many points, whilst telling ourselves that we didn’t care. Ha ha.  The old ego still alive and well.

There was such a storm on the highway that we had to stop because we literally couldn’t see the road. Once again I bought of those people in the open cars. Every day they sit in the rain at least twice. Truly tough.

Then the road surface changed. Or at least that’s what we told ourselves was the noise coming from the car. But it wasn’t the road surface and 100 meters down the track Tilly dropped her bundle. The fan belt came off and the radiator began spewing green water as the bearing from the water pump shattered. It was very quiet again in the car as we rolled to a stop.

Maybe we wouldn’t do the passage checks after all.

The sun came out as we inspected the damage and I brushed up on my Russian as I tried to find a tow truck. Nyet!!! After several phone calls  and a 40 minute wait.(For which we were very grateful and lucky.  Because it can take hours, but he was 5 minutes down the track with another ptop car on top who had a local nearby weld the piece they needed and they back on the road just as we needed the truck. We didn’t have a local with a bearing unfortunately) 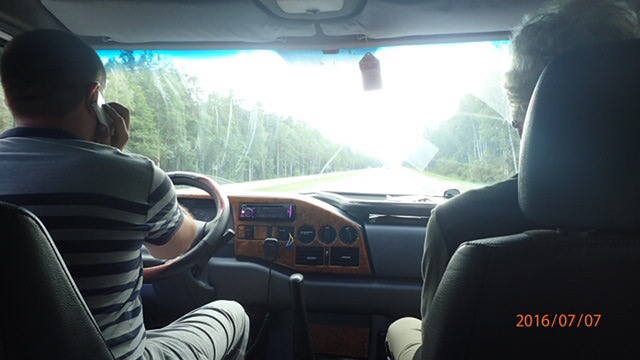 Now we were in the tow truck with a 27 year old driver whose English wasn’t that much better than our Russian. I wanted to drive straight to the workshop 150 kms away in Brest, but Gunther wanted to drive the car over the finishing line to avoid a further 12 hours penalty.

” You have to fight a little bit” he answered.

To save WW3, we rang the clerk of the rally and he said all we had to do was drive over the finishing line. Tilly could do that.

The finishing line was in the town square in the middle of Brest, with many people and a big red arch to drive Tilly through. So to my deepest embarrassment, signing autographs again and having my photo taken for Who magazine next to Tilly on a tow truck, we had to unload her and move that car over the finishing line. In front of everyone. I just wanted to crawl away and never see a rally again. Gunther was chuffed that we had done the main time check. Yin and Yang!! We will use the wisdom of China where we started the rally. Surely that must  be the silver lining!

We went eventually to the Brest Lada workshop where we have been royally treated and stayed till 11.30 last night while they tried to fix the water 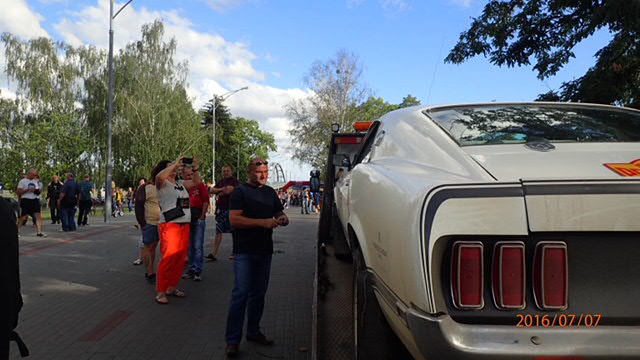 The young daughter of the director of the Lada Centre was called Olga and she looked after us. She bought us food and took us back to the Hotel at 1.30 at night even though she had to start work at 8 the next morning. Her father and the other mechanics stayed up till 5am working on the model A ford that came in Then Andree the boss picked us up from the Hotel this morning because he said the taxi drivers would rip us off. Meanwhile the mechanics have made a new shaft, new bearings and a new seal from a Russian 4×4 Lada. They make everything here. No cheap imports from China! So basically we now have a Russian Lada and not only that, some one has stuck Russian Lada stickers all over the car!

Our car is morphing into a different animal.

So now my FOMO has grown exponentially as the rest of the rally has crossed the Belarus/Polish border and we are here alone!! It’s 2pm and we are still waiting for a new gasket because ours didn’t fit at all. The lovely Olga presented us with about 3 kilos of Belarus chocolate and some schnapps. Once again we are treated so well and it has been a great experience. We have learnt much about the Belarus culture. I secretly think it’s been even more interesting than driving around a dirt track.

However its going to be a very long day and how am I going to survive on missing out on all the fun with the rally. Maybe we won’t even catch up?????

The real silver lining. We would never had met these lovely people.