Tonight is our last night in Russia. It has been a fast and furious transit, and we have chewed up 6039 kms in 12 days.


Russia will leave a lasting impression on us and we hope to return with more time to explore. It’s fitting that our last night is in Smolensk, which means tar, resin or pitch. Apparently the Rus’ people sailed from the Baltic up the river the Western Dvina as far as they could then pulled the boats onto land and dragged them along to the upper Dnieper. In Smolensk they fixed any leaks and small holes that appeared after the fun they had dragging the boats over the ground. It’s not unlike us dragging the cars across Russia. There has been much welding and fixing of leaks and holes in our cars also.
The further West we have come, the more European Russia appears. The land has become thickly forested and hilly, the population density has increased, there are more churches, more flowers, huge fields of Elderberry and sometimes it looks as if we are driving near Wiesbaden in the Taunus.

Except that in the Taunus there aren’t horses just standing on the road.

We haven’t had he chance to meet too many Russians but one of our fellow traveller’s is one of the worlds biggest salmon farmers and has sold tons of fish to the Russians for over 15 years. He says that they are great people to do business with (if you know their way of business). From what we have seen many of them certainly love cars and we have had a fantastic welcome from them. In every village there are kids and people waving and smiling. Even in their bathing costumes. I hope I don’t have to see too many more Russian men in speedos, big round bottoms and hairy chests. Gunther doesn’t feel quite the same about the girls in bikinis who stand at the side of the road taking pictures. Summer is obviously time to get a bit of sun. No wonder when in winter there is up to 10 meters of snow.

Then there were the brothels in the hotels. 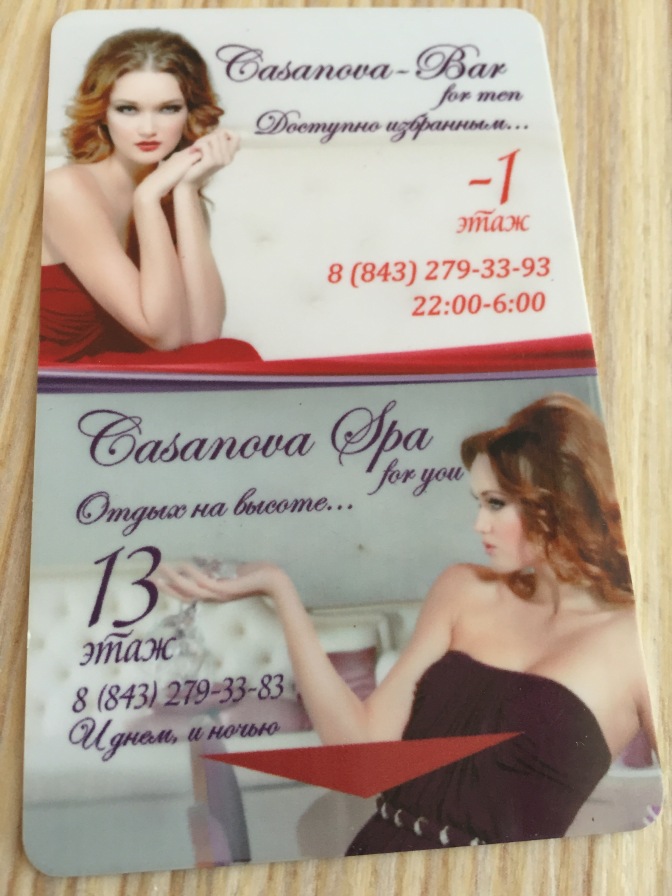 This was the park card they gave me for our hotel in Kazan. The spa for men was in the 13th floor and the strip club on the first floor. In N. Novgorod there was a strip club next to the bar in the hotel.  I don’t think the Russians are too shy about sex. Not that I really know. But I do think that the cars are a great chick magnet and all the Russian girls seemed to have the longest legs I have ever seen! There is a competition between the guys to see who can get the photos of he prettiest girl in their car. I think Gunther has already won that competition!!

Tha morning we did the Moscow race circuit which was very exciting. 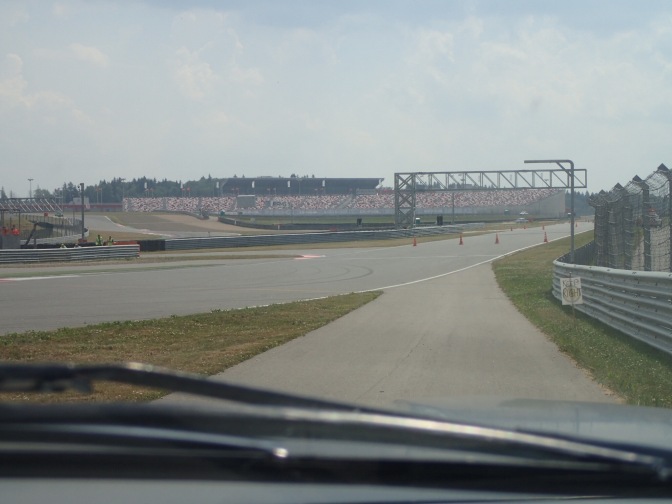 There was much screeching of tyres  and I did a very average job of calling the corners by yelling out above poor Tilly’s roaring engine that every corner was sharp. Well, it was!!!

Goodbye Russia, it was a great ride!!

8 thoughts on “FROM RUSSIA WITH LOVE”