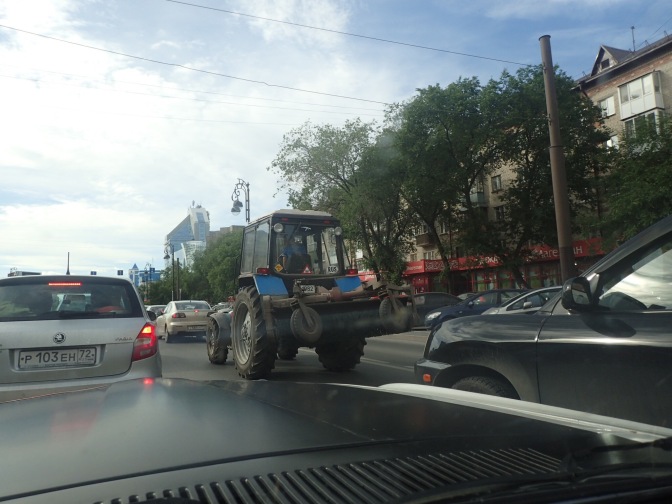 They have very big cars on the road here. Maybe we should try getting to Paris in one of these. It may be slow, but definitely good for the paddocks we are driving over!!

We thought that after leaving Mongolia we would be on easy street and could cruise towards Paris, taking in the sights and having coffees in cosy Russian roadside cafes.

Over the last threedays we have covered over 1500 kms. We’ve crossed the border between Asia and Europe and the land has begun to change from a flat, wide landscape to rolling hills covered in birch and pine forests. 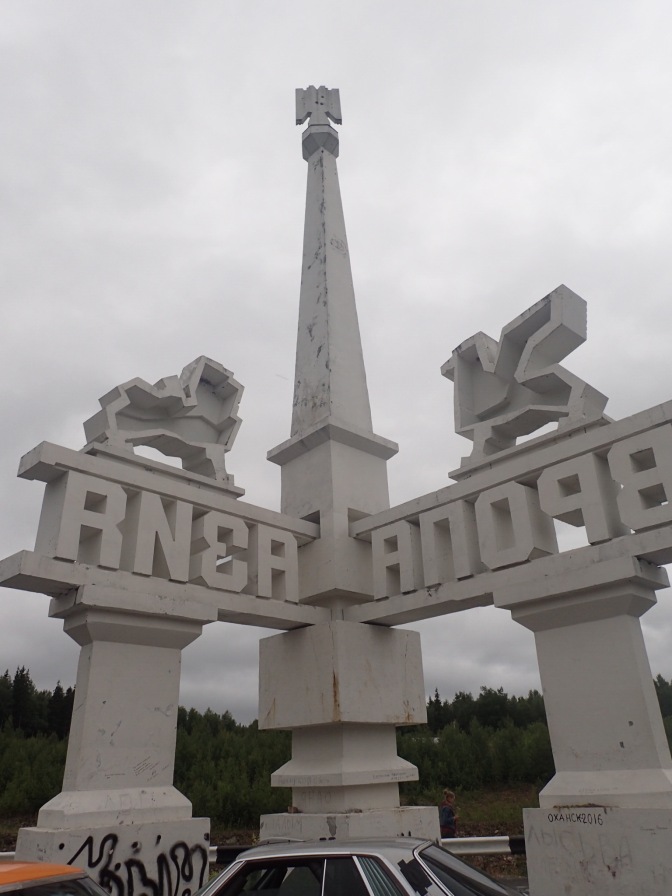 We had a wonderful welcome in Chusovoy where we turned a corner and there were hundreds of people to meet us. Highly embarrassing as all we were doing is driving a car and as I slapped hands and said hello a thousand times I thought,”Oh well,  I might as well fake it till I make it” and signed all the autographs feeling like Nicole Kidman. If only they knew it was only Mr and Mrs Schmidt from Mosman!!

We had to drive up onto a very high podium where they read out our names and where we were from. It was so steep that coming down it was like diving off a cliff and we (well, Gunther), had to just point Tilly in the general direction, hoping that she wouldn’t fall off the side. One car, I think it was a Pontiac coupe, had lost its brakes and had to come down using their hand brake, which was decidedly scarey! The welcome brightened the day and made us feel very special. 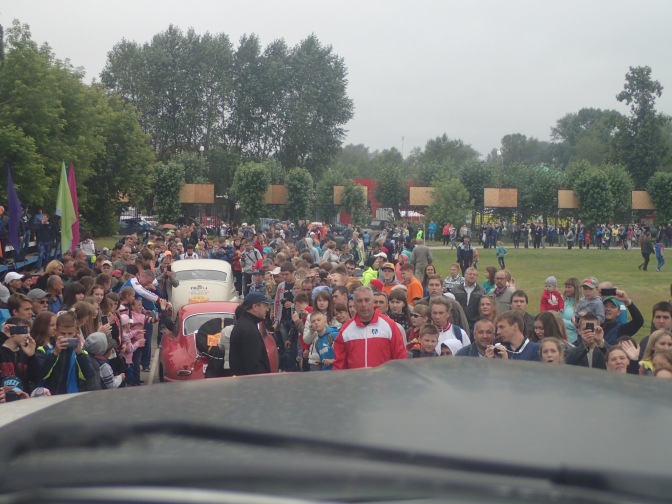 On day 18 we left Perm at 9 am and finished at 7pm in Kazan for a much needed rest day. With 628 kms to cover, our road books led us to  three test sections. The test sections were very muddy and slippery, with oncoming traffic complicating the drive. The other roads were very badly rutted and had many pot holes and the cars got a real hammering. At the end of the day when everyone was nice and tired we did a  racing circuit. Much more relaxing than a beer.

There have been more casualties, with one of the leading cars in our section stripping the splines off the half shaft drive flange, (are you impressed? I had to copy that word for word, not a clue what it means), and one of our favourite cars, a Morgan has major engine problems.

Someone said this morning that Russia would sort out the weak ones. I thought Mongolia had already done that. It is dawning on everyone what the word endurance means both for man and machine. We still have three weeks to go, have covered 7483 kms (probably more with the occasional off route explorations), and have 6212 to go.

We are getting to know people better and are sharing may experiences together. We have watched crews working hard to keep the cars on the road and there has been lots of heartache and disappointment, as well as days where things just truck along and one is happy that the car went smoothly. We are getting used to dealing with the unexpected and the frustration of situations not going the way we want them to. A steep learning curve for control freaks like Gunther and I.

Kazan is the capital of Tatastan and was formed in the late 13th century. It’s the 8th largest city in Russia and is modern and urbanised, complete with Macdonalds, KFC and Pandora.  I was lucky enough to walk around the city and explore the Kremlin which is a world heritage site, with the Qolsharif mosque and a lot of old buildings that have been restored to their former glory. I never know what to expect in this country. It holds many surprises. It has an authenticity that says it is what it is. They don’t need to impress anybody. 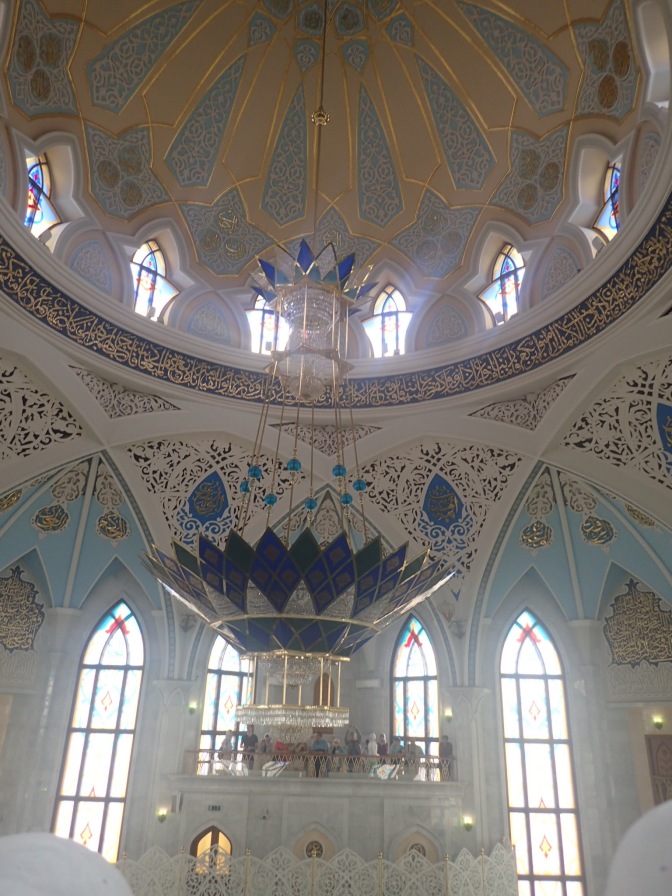 Here is a pic of a market we went to which sells all sorts of hardware. Certainly cheaper than Bunnings. 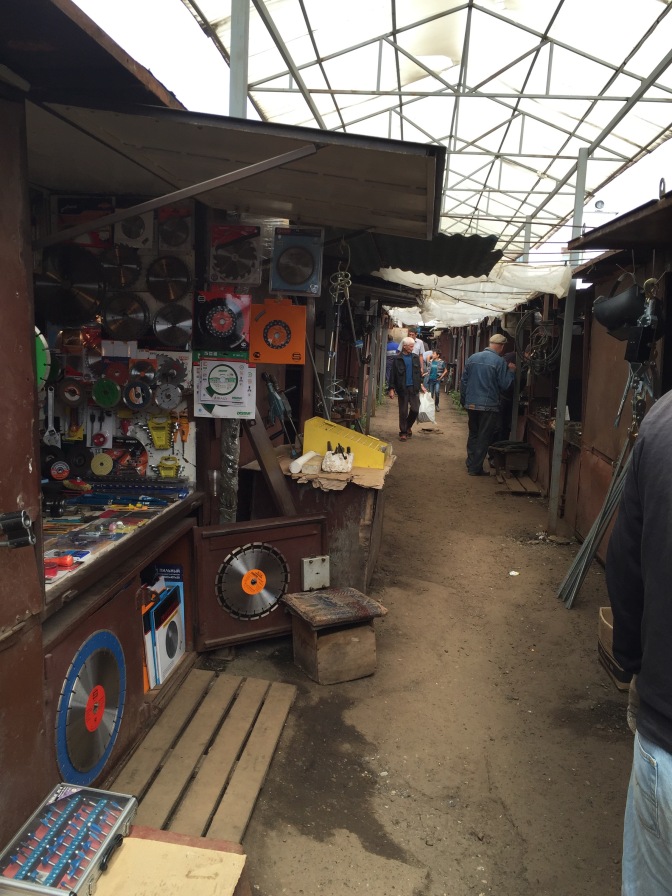 Gunther has seen the underbelly of Tilly all day. There was a mafia organising workshops this morning and it was chaos. He finally found somewhere to go and had to fix a broken control arm and other bits that were damaged when the castor bar broke. It was very difficult to find a hoist and he had to be content with a garage floor. He left at 7 this morning and isn’t back at 5.30. So much for his rest day. I think I am going to have to be nice to him when he gets back!!!

4 thoughts on “SORTING THE WEAK FROM THE CHAFF”