Our last days in Mongolia were long and hard. Driving all day, interspersed with time trials and many cars breaking down. Every day there was a new story. We had a river crossing where at least three cars ruined their motors by starting the engine while it was wet and thereby blew  the engine up. A Volvo became stuck half way across the fast flowing river and the driver was screaming for people to pull him out while his car slowly filled with water. When he was finally towed to the other side and opened his door, the water poured out of the car, leaving everything inside soaked. He was not a happy man! 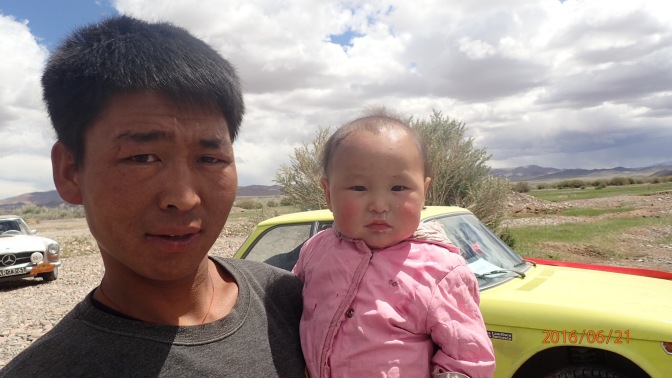 We finally reached the border on a grey and rainy day. We had been told to be very serious at the passport control, not to smile or make jokes and to be very polite. That unfortunately only makes one want to laugh. The process took hours as we stood in no mans land where a freezing wind wind blasted through the area we had to wait in.

Finally through we headed to the worst camp site ever. Apparently in true Russian style they were still erecting toilets when we arrived which was just as well because half the camp had diarrhea. The shower was a bucket of hot water behind a very breezy and dodgy shower curtain. Dinner was a bun fight. Everyone was hungry and fell upon the food as if they hadn’t had eaten for a week. The thing with rallying is that often you don’t eat lunch, so by dinner time you could eat a horse. Oh dear if you could have seen grown men fighting over a bowl of soup!!!(I am exaggerating)

But above and beyond that the Russians were marvelous. So enthusiastic about he rally, friendly and so interested in the cars. They had all dressed up and visited the camp in droves, they held a concert for us and danced and sang.

I was very curious about Russia and we were thrilled that Tilly had made it through Mongolia without great damage. A different leg of our trip was about to start.

2 thoughts on “LAST DAYS IN MONGOLIA”