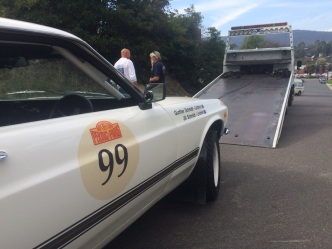 We called the car Matilda for a few reasons. First of all because Gunther thought she was a lady. I felt it was far more a blokey car, not at all ladylike, but she IS light on the wheel and Barry the old owner, told us that we had to keep her dancing across the roads. So that solved the sex of the car. A bloke can be light on his feet, but Gunther has to lead the dance.

The next decision was the name. We needed something that described us and and the car. The song Waltzing Matilda has both Australian and German meanings in it. Not only is it a song written by Banjo Patterson, a well known Australian bush poet (and we will definately be off the beaten track), it also describes a ‘walz’ which is derived from the German ‘auf der Walz’ whereby in earlier days the German apprentice carpenters, roofers and builders would leave on a three year walk around the country finding work. We are also going on a journey. Hopefully it won’t take us three years and I really hope we won’t have to walk!!!

So we figured that Tilly was the perfect name to describe our new set of wheels.

The team has left Australia, the car on the open ocean on her way to China with all the other Australian cars, and Gunther and I in Germany doing the last minute preparations.

Bruce and Gunther have worked hard in the workshop in Ferntree Gully in Melbourne where the car was restored. It has taken two years to get to this point and Bruce has been a marvellous head mechanic, not only in bringing the car back to life but also in training Gunther along the way to the point where he now not only hands Bruce the spanner, but also knows how to change the accelorator pump nozzle on the carbie – (yes I know what a carbie is, but don’t ask me what  a pump nozzle thingo is).